This week I had a revelation – I CAN have cheeseburger!  What joyous news! 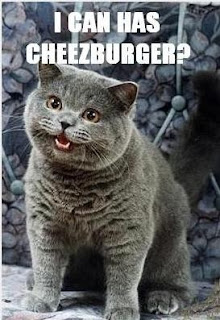 Yes, little brother, you CAN!

While marveling over this wondrous discovery, my light little heart sunk like a balloon as Mommie started reading the newspaper aloud; the story left me both disgusted and chagrined.  It stated that only 27% of junior high and high school students tested“proficient” in writing – and that was with the help of spell-check and the thesaurus feature. This got me to thinking: Do people really think that cats suffer from a lack of grammatical skills so deplorable that we are only capable of LOL speak?  Sorry, I digress; as I have said in the past we cats tend to slip into self-centeredness from time to time. 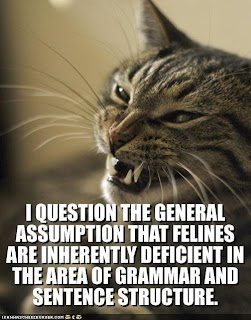 I do all the grammar and spelling corrections myself!

As I was saying, twenty-seven percent of our future adults are considered to be “proficient” in writing; this means that 83% are below the minimum standard set by educational experts.  I thought about this and a cold shiver ran down my body as I wondered, “Who will be left to write Cat Fancy once this generation of writers retires?”  I immediately looked to my Mommie, pleading with her to pick up the torch, but she thought I was pleading for a treat and ignored me.  Darn diet!

As Mommie continued to read to me, I started wondering when – and why – the writing abilities of our youth have plummeted to such embarrassingly low levels of proficiency.  Is it the use of word processing programs?  Have they made us dependant upon spelling and grammar checks to catch our every mistake?  Is it because grammar is no longer taught in schools?  Is it instant messaging habits that have taught us to sacrifice quality for speed?  I decided that this issue deserved further investigation, and planned for a field trip.  To the Tazimobile, Mommie – let’s go! 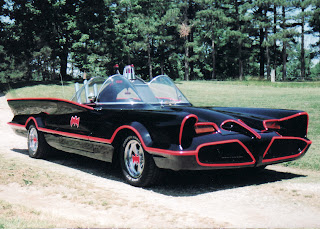 I like to imagine the Tazimobile as being this cool...

As it turns out, the Tazimobile was in the laundry, so I jumped into my Tazi-Sack (a much snugger version of the Tazimobile) and accompanied Mommie to her school, a place dedicated to academic excellence...or so I thought.  On this particular day the library was buzzing with activity – the perfect setting for a kitty-cat to wander about unnoticed!  I chose to hide under the computer stations so I could peek out and view what people were writing; I am sorry that I did, for it was hard to resist the temptation to scream “GOOD G-D, I’M BLIND!”  Here is but one example of some of the stuff I saw:

I gotta diskribe a seen for dis paper, but I don’t kno what to rite about.  I am chillin at da skewl and hopin dat sumthin good will happin to rite about so my teacha won’t flunk me for fukkin dis up.

Where do I start?  First, I apologize for the profanity, if that really is what it is...it’s a little hard to tell, considering that the entire narrative is profane in my eyes.  I realize that I can get a little creative with my spelling (I like to use the Canadian “-ie” ending rather than the American “-y”) but at least I stay within the realm of proper spelling and grammatical canon!  What truly makes me sick is that my Mommie’s school (skewl?) is a college!  I’d had enough of the horrors, and climbed back into my Tazi-Sack head first, offering my opinion of the situation in the form of my rear-view. 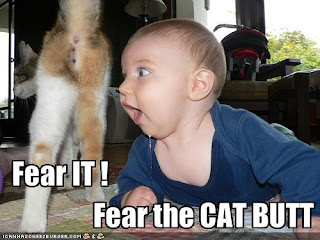 After returning home and begging for some treats to calm my nerves, I did a little first-hand research on the possible causes of ’s lack of grammatical proficiency.  Cozying up to a school-teacher friend Mommie had invited over for coffee, I learned that in many school systems teachers are no longer allowed to grade a paper down for incorrect spelling or poor sentence structure.  “Ummm….upon what criteria is the paper graded?” I wondered?  Thankfully, so did Mommie and ironically, the answer was “material content”.  So spelling and sentence structure are now considered immaterial to the content of a paper?  Apparently so; because, according to Mommie’s teacher friend who prefers to remain anonymous, “Not everyone speaks [proper English] in the home, so [teachers] cannot expect students to understand what is correct and what isn’t; by correcting them we are criticizing their cultural way of speaking.  Or so we have been told”.  Parents, please correct me if I am wrong but wouldn’t you prefer that teachers criticize your “cultural way of speaking” – as well as pants on the ground and backwards hats – than allow your child to enter the working world completely unprepared to succeed?

Say no to crack!  Pull up your pants!
Song: "Pants on the Ground" by General Larry Platt
’s 27% writing proficiency rate is proof that the current methods are not working.  It’s time to try something new and get back to the basics.  It is time to get real, youth of .  I have heard that the real world doesn’t care about self-esteem; that’s a lesson that will be harder to take if you spend your formative years in a bubble.  Pay now or pay later.

Snuggles to all,
Tazi