Get Out And VOTE, Americans! Tazi-Kat For President 2012

Today is Election Day in America, a day to exercise your privilege to choose your government leaders.  I will not lecture you on the importance of voting (I gave that chore - I mean honor - to Mommie this past Sunday) but I do ask still undecided voters for YOUR vote!  That's right!

If elected the first thing I will do, aside from poop bricks from both shock and fear, is resign the office so that an election between candidates the vast majority of Americans would actually want for President can take place!  In the meantime, can you think of a better candidate for President than a cat?  Cats are un-corruptible - we treat everybody with equal disrespect, regardless of who they are or how many cat treats they may offer!

Think about it, Americans...think of all the wars that could be avoided if we just handed out Paw Slaps of Disgust instead!  Think about it...but not too hard, because then you might see just how ridiculous voting for a cat really is! 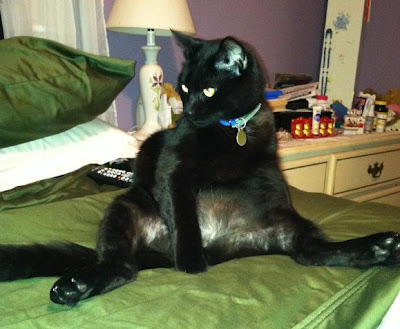 HE'S NEUTERED, SO YOU KNOW HE HAS NOTHING TO HIDE!