Should He Ask Her To Marry Him On A Gift-Giving Holiday?

I am preparing to propose to my girlfriend of almost one year.  I would like to do it on Christmas Day, but my buddies are all telling me not to do it on Christmas Eve or Christmas Day.  They say that if our engagement breaks off before we get married the ring could be considered a Christmas gift and she would have the right to keep it, whereas if we got engaged on a different day - say New Year's Eve - I would have the legal right to retain the ring if the marriage doesn't take place.  Do you know if this is true, Tazi?

I love my girlfriend very much, and I don't see us breaking up before we get married, but you really never know what is going to happen.  I have paid a lot of money for the ring, so if we were to break up I would want to get it back.  Should I wait until New Year's Eve to ask her to marry me?  Or should I go ahead with my original plan?

I think you should wait.  Indefinitely.  Your girlfriend has not yet said yes to marrying you and already you are planning what should happen to the ring if your engagement ends. While you may see this as a manner of practical thinking, I see it as placing a higher value on the ring than on the woman you love. 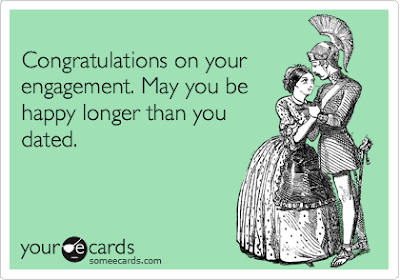 I am also wondering why you are so concerned about the possibility of a break-up before you get married.  If you think your engagement will not last than you should not be getting engaged.  Furthermore, you give your girlfriend very little credit in the class department.  If your theoretical engagement were to break up, why are you so certain she would not offer to return the ring?  If she were to leave you, giving the ring back would be the first item on her "to do" list; if you were to leave her and ask for the return of the ring, a gentleman would give the lady time to mourn the demise of her relationship, a lady would return the ring within a few months time.

If you are dead-set on getting engaged this holiday season, I suggest that you buy your girlfriend a spectacular Christmas gift and hold the engagement ring until New Year's - not because I foresee a legal battle for the ring, but because this plan should ease your fears of losing the rights to what you consider yours.

P.S.  You do realize that diamonds have a horrible resale value, right? If you were to try and sell the ring, you might get back as little as 10% of your purchase price.  Not many people want to buy a ring from a broken engagement - they see it as tainted with bad luck, and I can't blame them for their superstition (said the black cat!).  If you were to keep the ring, do you honestly think another woman would accept an engagement ring purchased for someone else?  My mailbag tells me no.