[Ed. Note: Tazi-Kat is taking a holiday vacation this week. Please enjoy a letter that you may have missed the first time around!]

My husband and I are having an argument over an embarrassing topic, and we need a neutral third party to settle it. I cannot take birth control pills because they make me sick; I hate the way a diaphragm feels; and an IUD is too expensive. My husband "Xander" will not have a vasectomy, so as a solution to this problem we use condoms. Because we are married, we don't want the whole world to know this - like I said, it is embarrassing.

On our last trip to the local drugstore to pick up a few prescriptions and what not, Xander decided to grab a large box of Trojan vibrating condoms (which is not what we use!) and loudly ask me from ten feet away, "Honey, do we need more condoms?" as he shook the box for emphasis. Angry and humiliated, I shouted back, "No dear; we still have plenty at home!". Xander feels that in saying this, I was announcing to the entire (rather crowded) store that we don't have sex very often; I feel that he basically announced to the store that we have a kinky sex life and that we are constantly going at each other. At this point, I do not want Xander touching me until he apologizes; but he feels that I owe him an apology. Who do you think is right, Tazi?

Your story reminds me of one my Mommie once heard, while working in a pharmacy. A woman shyly walked in to buy a box of condoms, and the pharmacist asked her "what size?", referring to the size package she wanted. The woman, not understanding the question, responded, "Well, to tell you the truth, my husband is on the small side..."

I share this story with you so that you and Xander can see that there are much more memorable conversations that occur at the pharmacy, and that your tiff probably does not even make it into the Top 10! Xander was wrong to make such a public announcement in a crowded store, knowing that you would prefer to keep your method of birth control a private matter. A Tazi Paw Tap of Disgust to his nose for breaking your confidence! 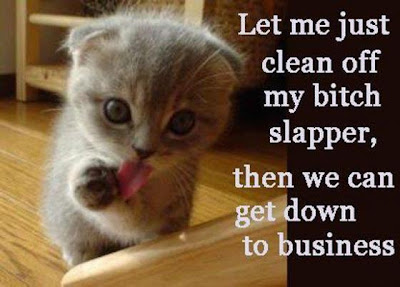 I have to add, though, that your smart-remark right back to Xander, while difficult to resist, obviously hurt his feelings. If this is the first time that Xander has broken your confidence, I would let it slide and offer an apology to him in return for an apology from him. Once apologies have been given, I suggest you kiss and make-up. Marriage is difficult enough without holding a grudge over a bruised ego.