Repost: Child Asks Not For Herself, But For Others This Christmas

[Ed. Note: This is a re-post of a column that ran last December. Please remember the needy during this time of giving!]

I am seven years old and live in Rhode Island, just like you!  My Nana is helping me write this letter because I type slow.

Last year at Christmas, Mommy and Daddy were both not working and they fought a lot about how to spend money.  Mommie told me that even though Santa brings us gifts, he asks that people give donations to help him with the cost of the stuff it takes to make the presents. She said that we didn't have enough money to give any to Santa, so there would not be as many presents from him as usual.  At first I was really sad, but then I was happy!  On Christmas morning I saw that Santa had come to my house anyway, even though Mommy and Daddy could not give him any money!  There were small presents from Mommy and Daddy, and a BIG one from Santa!

Daddy told me that Santa has a special bank account that people can put money into so Santa can afford to make presents for people who do not have any money, so nobody is left out at Christmas!  Daddy showed it to me in the newspaper and everything, so I know it is real! There was a picture of Santa's elves on it and everything!  They were standing with some people called Marines. Today, I was looking for the funnies because I like to read Garfield and I saw the picture of someone who was dressed like the Marines in the picture I saw last Christmas, and they were collecting gifts for Santa to give to kids whose parents can't afford to help Santa with the cost of gifts. 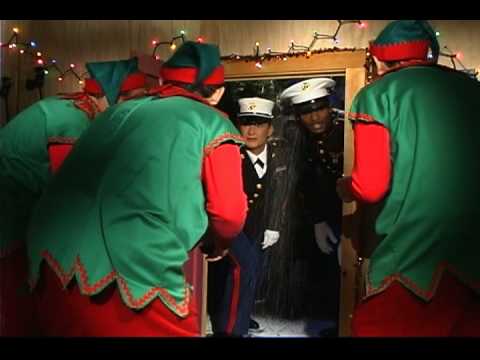 I don't think everybody knows about what these Marine people do to help Santa, because Santa had to put a message in the paper asking for donations.  I can't afford to give a whole toy, so I am going to give my allowance instead!  Could you tell people about it in your Ask Tazi! column?  Everybody in the whole world reads it, so I know that lots of people will see it and want to help Santa help parents help kids get Christmas presents.  Thank you, Tazi for helping the Marines and Santa bring Christmas to everybody!

It sounds to me like you are talking about the United States Marine Corps Toys for Tots program!  This is a wonderful program that accepts donations to help Santa with the cost of making toys, feeding his reindeer (they eat a lot!), caring for the elves, and taking Mrs. Claus on a Florida vacation every January!


Santa gives away as much stuff as possible for free, but sometimes even Santa needs help! That is why he set up a special bank account so people can give help to people who cannot afford to help.  Wasn't that smart of Santa?  You are a very generous young girl to want to give your allowance to help!

Although everybody in the whole world doesn't read my column, I do have a lot of readers!  I am printing your letter so they can see how happy their past generosity has made one child (you!) and hoping that they will consider a donation to Toys for Tots this Christmas!  A lot of people don't know that they can make a donation to Santa's special bank account!  They think you have to buy an entire toy!  Thank you, Madison, for helping me spread the word!  Readers, here is the link to the Marine Corps Toys for Tots secure donation page:

to donate to the U.S. Marine Corps Toys for Tots Program

Readers, if you are struggling this holiday season, you can also request a toy from Toys for Tots to ensure that your children are not left out during this season of giving.