I am re-running this popular column because once again the Rhode Island General Assembly has introduced legislation to cap the interest rate that payday lenders can charge. What are your thoughts on these services?


I think we have all heard the commercials and seen the stores for Check ‘n’ Go, Advance America, and other payday cash advance services. I have read the commentaries on such services, which have been both praised and vilified as God Sent or the financial version of Dante’s Ninth Circle of Hell. One thing I have never done though is pay much attention to them since I never had a use for such a service.

This past week I was reviewing the activity of my state legislature (reading over my Mommie's shoulder, because contrary to common belief, college students and cats are both politically aware) when I noticed a bill regarding the interest rates charged by these payday advance services. Although happy with the nature of the bill, the need for it my left me with a bitter taste in my mouth. It turns out that Rhode Island is the only state in New England that allows payday advance services to charge a greater than 36% APR – much greater. In Rhode Island, the maximum allowable annual percentage rate for a payday loan is 260%. No, there is not a missing decimal in that figure; 260% APR is the rate for a payday loan in Rhode Island. I find the exorbitant interest rates allowed by law quite ironic, considering that loan-sharking is illegal.

For those who are not familiar with how a payday advance works, it is pretty simple: The borrower writes a check for the amount of money borrowed, plus the interest charge, which in Rhode Island is 5% of the total borrowed per week, or $10 on a two-week, $100 loan. The borrower has two weeks or until their next payday to repay the loan plus interest charges, whichever comes second. If the borrower fails to pay on time, the lender will cash their check. If the borrower’s cash is elsewhere committed when the loan comes due, they can pay the lender in full – including the interest charge – and take out a new loan, essentially revolving the debt. However, because the original loan was paid in full after only two weeks the additional interest charges to the borrower are not reflected on the lender’s books, just in the borrower’s wallet. Ergo, the interest is not capitalized, a selling point these lenders like to highlight. This all sounds pretty simple, but even the simplest things can quickly become complicated.

Payday advance services make money on high finance charges. The lender is not going to get rich off of the person who is borrowing $50 to cover the week’s groceries due to an unexpected car repair biting into their budget. This is why the lender does his or her best to up-sell the borrower into taking out a larger loan, explaining how the borrower can revolve the loan by paying only the interest. Most people who use payday lending services do not have good credit, otherwise they would be using a credit card; nor do they have anything of value to secure a loan through pawn. In short, they have little, and have little chance of changing that anytime soon. Their financial outlook is depressing and here is someone offering to help them improve their credit by offering them a loan in excess of what they need! So the cycle of madness begins…

Through vice; bad choices; poor planning; bad luck; or a combination of all of the above, many who use payday cash advance services do not have enough money each week or each month to pay for their basic needs, and have come to depend on payday advances as a way of extending their income. Loans are taken for an amount equal to half or more of their next paycheck – but when their next paycheck comes around, they need most or all of it to pay the rest of their bills and living expenses. The only immediate solution is to pay just the interest on the advance, revolve the loan, and hope that things will improve over the next two weeks. Rarely do these hoped for improvements occur, and the cycle continues, with borrowers paying double, triple, or more in interest on a loan that will never truly be paid-in-full, regardless of what the lender’s books say. The fact that the interest rate is horrifically high only helps to perpetrate this cycle.

One way out of this vicious cycle would be to put aside monies – even as little as $20 a week – to put towards the principle on the micro-loan. Give up coffee shop coffee, cable, or the mobile phone and the money will be there; it will add up rather quickly, allowing the principle of a $100 loan to be paid in only a few weeks as opposed to never. I realize this is something people who get caught up in these schemes do not want to hear – they want to hear words of sympathy of how they were victims of easy credit rip-offs (okay, all together now "Ain't we lucky we got 'em, Good Times!") and how the government should do something about these legal loan sharks (which legislators are attempting to do here in Rhode Island). These legal loan sharks, in turn, argue that they are loaning money to high risk creditors and therefore need to charge 250%+ in interest to stay in business, pointing to their default rate as proof of their losses. Which came first, the chicken or the egg? Either way, the situation is a scrambled mess.

I do not disagree that the interest rates charged by these businesses is positively criminal, and that it should be drastically lowered and legally capped to, say, 52% APR which would be approximately 2% every two weeks on a short-term micro-loan – low enough to be manageable but high enough to create a profit. I also believe that there needs to be a certain level of personal responsibility involved on the part of the borrower. In other words, don’t borrow money that you cannot afford to repay; don’t commit yourself to contracts that aren’t in your budget to cover. I am amazed at how many “poor” people are walking around with smart phones, insisting that they “need” one (to the cost of $100 or more a month) in order to get by in life. I have received letters from the unemployed questioning why people do not understand that they “need a smart phone for work”. My little kitten mind is baffled at such logic! 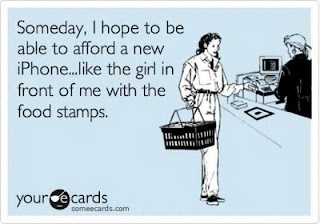