Woman Says "Yes" To Proposal; "No" To The Ring

My boyfriend just asked me to marry him and I am so super excited! Of course I said YES! There is just one problem: I absolutely hate, with every fiber of my being, the engagement ring he gave me. It is an old-fashioned, round cut, 2 carat, diamond solitaire; completely not my style. I would prefer something trendier, with baguettes, in white gold; something along the lines of an emerald cut or maybe a princess cut stone, too.

The bigger issue is that the ring he gave me belonged to his great-grandmother and has been passed down through the generations – his grandfather gave it to his grandmother, his father gave it to his mother, and now his mother is passing it on to him to give to me. There is no way I could possibly ask him to buy me a different ring, one more to my tastes and liking; but this thing really depresses me. I mean, I am wearing a dead person’s jewelry! I am also afraid if I ask for a different ring that my fiancé will decide he’d rather have a different girlfriend, one that will accept his heirloom engagement ring. Should I just try and cope, Tazi? I love my fiancé, but I know that I will never learn to love this ring!

Signed,
I’d Rather Be Ring-less

Dear I’d Rather Be Ring-less:

I realize that an engagement ring is so much more than a piece of jewelry; it is an outward sign of the love and commitment between two people. Do you realize the importance of the ring your fiancé presented to you? Or were you blinded by disappointment that it was not the diamond of your dreams? Does your fiancé know exactly how self-centered you are? The man has given you not only a symbol of his love for you, but one that expresses his family’s acceptance of you, as well. If they did not like you, they would not have handed down the heirloom ring to you. Does this mean anything to you? I am so disgusted right now I would paw-slap you if I had not recently discovered transcendental yoga! OHM!!! OHM!!!! 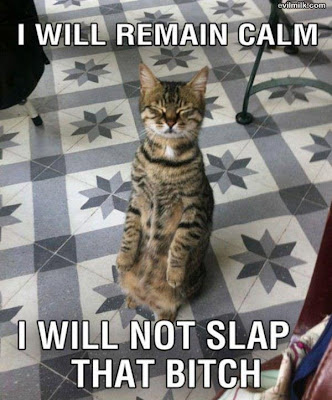 Okay, now that I am a bit calmer I will advise you not to tell your boyfriend that you hate the ring he gave you. I doubt that he would leave you over it – unless he is as shallow as you – but hearing this would break his heart.

If you cannot rise above your dislike of your engagement ring, I suggest that you approach his mother about it. Explain to her that you are unworthy of such a precious ring (because you are not worthy) and would feel more comfortable seeing her wear it as the rightful owner until the time to inherit arrives. If your fiancé’s mother is still young and healthy this should buy you a at least a few decades – if she agrees to take back her ring. Before you return the ring, you can explain your actions to your fiancé and request a modest engagement ring – not the $5,000+ rock you described! An emerald cut diamond is the priciest diamond cuts out there! The heirloom diamond that he gave you may not have cost him a dime, but it’s sentimental worth must be priceless. I hope that you will eventually come to understand this. OHM!

No snuggles for you,
Tazi