You have got to be the sweetest kitty-cat on the face of the earth, taking time out of your busy nap schedule to help us humans with our problems. Will you please help me with mine?

My father-in-law, "Chuckie" is an absolute nightmare. The man is mentally abusive, and gets off on making people cry. When I first met my husband, he told me to my face that I wasn't good enough for his son, "Barry". At our wedding (mine and Barry's) Chuckie stood up as if to toast us and announced he was starting a betting pool on how long our marriage would last, inviting the guests to place their wagers. When I got pregnant with our first child, Chuckie asked Barry (to both of our faces) if he was sure it was his kid, since "your wife is such a slut"! Tazi, I am not a slut and yes, the child is Barry's!

I am now pregnant with my second child (my first is almost two) and Chuckie is at it again, telling Barry that I will be "two tons of fun" after our second child is born, based on the fact that I did not lose the last 10 pounds from my first pregnancy. I know that my husband loves me unconditionally - and he has told me as much, in case I did not - but the stress of being around Chuckie is taking its toll on me. I do not want him visiting the house (he complains that I am a poor housekeeper, which I am not) and I do not want him around the children. My husband feels the same way, but will not stand up to his father and allows him to see our young son whenever he wants, which means Chuckie is over all the time.

I have tried kicking Chuckie out but he refuses to leave, saying "[his] son's paycheck pays the mortgage", and until Barry kicks him out he will "stay as long as he [darn] well pleases!" He then taunts me, telling me to "call the cops" if I don't like it. I am sorely tempted to do just that, but I know that it would only put my husband deeper into the middle of the problem; maybe even forcing him to choose between his father and me. Do you have any less drastic suggestions?

Signed,
Not Perfect, But Perfect For Barry

P.S. Barry's mother passed away years ago, so I cannot seek her out for assistance!

Does Chuckie have a key to your house? If so, change your locks; and do not open the door to him when he stops by to see your child. That solves the problem of his invading your home when his son is not there. If Chuckie comes there when your husband is home, that makes him a guest of your husband - not you, so feel free to take your child out to the park, for ice-cream, on errands, or whatever excuse you need to get the two of you out of the house while Chuckie is there. This allows for you and your husband to execute your desire to keep the children from Chuckie without putting your husband in the position of standing up to his father. (A Tazi Paw Slap of Disgust to him for not standing up for you, though!). 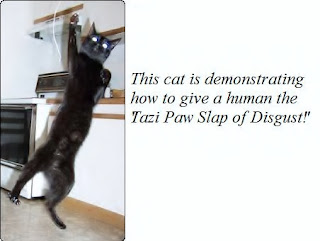 If Chuckie complains that you do not allow him to visit the children, tell him why you are keeping them from him: because he is mentally abusive, and you will not have them learning such atrocious habits. Once Chuckie sees that his comments are not playful or fun (as I am sure he sees them) and that hurling them at you will have negative consequences for him, he may decide to lighten up a bit. If he does not, continue to do what you must to protect your children from Chuckie's hateful and hurtful behavior, even if it means allowing only minimal (and always supervised) contact with him.

As for the insults Chuckie hurls at you in front of your husband: turn the insults around. If Chuckie calls you a slut, tell him that Barry got his taste in women from his father. If Chuckie calls you a bad housekeeper, hand him a mop and challenge him to do better. If Chuckie calls you fat, tell him that "not everyone can carry all their fat between their ears like you", implying that he is a "fathead". In time, you will learn how to stand up for yourself; and your father-in-law will either let up on the insults, having felt their sting; or you will discover that he enjoys the barb-throwing - at which point you will need to decide whether or not to ignore him.

P.S. Thank you for all the lovely compliments! I do appreciate them! Purrrrrrrr....