I am 18 years old and have the opportunity of a lifetime to go to an Ivy League school. My financial aid package will cover all of my tuition and fees, with a little bit left over for books, but I will still have to pay for my room, board, and living expenses. I am concerned as to how I will be able to work enough to pay for all this and study enough to keep my grades strong. I have a friend who suggested I try working in a gentlemen’s club. She said that I do not have to take my clothes off, that gentlemen’s clubs are different than strip clubs; that their cocktail waitresses dress sexy and make very good money without having to worry about men pawing them. She knows so much because she secretly works in one. Last year, she made over $60,000, working part-time during the school year and full-time during semester breaks.

My friend tells me that I have the figure and the looks to work as a cocktail waitress, as well as the experience from working in the local diner. I know how to be sweet and charming, but also how to hold my own against the tough customers who think that their large tips can buy them a little something extra. I like the idea of making good money while I am still in school, but I feel like I would be selling out my morals if I went to work in a tawdry place like a gentlemen’s club. Plus, as a student at an Ivy League I would have a certain level of sophistication to uphold, one that runs contradictory to working as a cocktail waitress, and yet the money is very tempting. What do you think, Tazi? Do you think I could find another job that pays well but would not lower my standards? Or should I look into cocktail waitressing at a men’s club?

Sixty-thousand dollars a year for part-time work would be tempting to anyone – until they find out what they have to do to earn it, so I can understand your hesitancy to jump at this job field. Since you believe that cocktail waitressing would leave you in an uncomfortable bind, I advise against it. I would never judge somebody by what they do for a living, so long as what they do is legal, but I would never push someone to take a job that compromises their morals. Remember, college is only four short years! Once you graduate, you will have the opportunity to make a comfortable paycheck in a career field that inspires you. 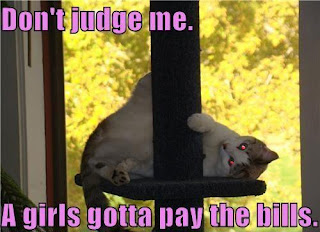 You do not say which Ivy League school you will be attending, but I live on the East coast and I know that many of the Ivy’s are in or adjacent to large cities; and with large cities come restaurants, from fine dining establishments to small café’s and diners, all of which offer the opportunity to earn a good income from tips. You may not earn as much as you would working as a cocktail waitress, but then again you might do quite well just the same – and you would be much more comfortable with your working environment.