Have you ever watched the Audrey Hepburn movie Sabrina, the one where two brothers compete for the same woman? I am in a similar situation as that, and I need someone to referee. I will call the woman in question "Katherine".

My brother and I are both divorced and in our fifties, so we are not kids. Katherine is about a dozen years younger than both of us and has never been married, although she has not lacked for male attention. Until recently, I thought her reason for avoiding marriage was because she had never bothered to grow up; but I could not have been more wrong about this amazing woman.

I have always known Katherine from the community but never paid any attention to her except to say hello when our paths crossed. My brother knows Katherine better than I because his ex-wife used to babysit her; however, I never knew he harbored feelings for her until I asked her on a date. That was when [everything] broke loose.

I recently attended a charity fundraiser as a way to network with some business acquaintances (and to support a worthy cause) when I spotted Katherine talking to a potential client of mine like they were old friends. I was surprised to see her there, but was pleased when she waved me over to join the conversation so she might excuse herself for a moment. It was in talking with my potential client that I discovered there is more to Katherine than I realized. I discovered that she is not chronically unemployed and a career student, but works from home as an Event Planner and holds two Masters degrees. I also discovered that she donates her talents to charities and was on the planning board for that evening's event. Seeing her in this new light I was completely taken with her and barely left her side all evening. Before the night was over, I had a date with her for the following weekend.

My mother happened to see a photo from the charity event in the Society pages of the local newspaper. It was a group photo, but my proximity to Katherine caught her eye. My mother has always loved Katherine (they are in the same garden club) so she posted the picture on the refrigerator, which is where my brother saw it when he came to visit. This is where things got ugly.

I won't give you a blow-by-blow, but suffice to say my brother has expressed interest in dating Katherine. He claims that he has been waiting for the right time to ask her out, out of respect for his ex-wife's relationship to her. Tazi, it has been five years since my brother's divorce and he has dated a string of women in that time. It has been seven years since my divorce, and I have dated one woman (a long term relationship that ended two years ago). I am not one to ask a woman out on a whim, and I think Katherine and I really have a connection. My brother has told me if I go out with Katherine I can cross him off of my Christmas card list. I think he is being selfish, he thinks I am being traitorous. I asked our youngest brother to moderate the argument, but he refused to get involved. I saw a copy of your column taped to my mother's refrigerator and thought, "Why not?".

It was only after I looked over the IMDB listing for Sabrina that I understood your signature. I suppose I am going to have to watch the movie now, huh? With regard to your problem, I have one question for your brother: Is Katherine even interested in you? As for you, what made you view Katherine in such a negative light before you got to know her better? A Paw Slap of Disgust for each of you, and be glad I am not forwarding your letter to the woman who gives out throat punches! 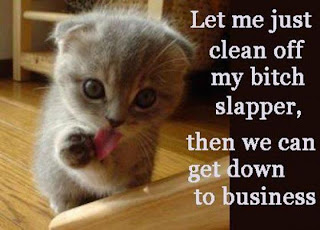 If this woman means all that your brother claims she means to him, why has he been dating a string of other women while biding his time to ask Katherine out on a date? If she is at all interested in him this has to have broken her heart! It sounds to me that he is jealous because you have "scored" something he wants but cannot have - a date with this woman.

Since Katherine accepted a date with you - that will have most likely occurred by the time this letter is printed - it would be rude of you to suddenly break off all contact with her. If things are going well with Katherine, I say continue to see her. Your brother will have to grow up and get over it. If things are not all that you hoped between you and Katherine, graciously bow out and allow your brother the opportunity to ask her on a date. Whatever you choose to do, you and your brother need to stop talking about Katherine like she is a piece of property. She is a woman, with feelings and a mind of her own.

P.S. to your Mom: Thanks for printing and posting my column! It means a lot to me! -T.K.