The Baby In This Stroller Is A Real Dog

I have a problem and I need an opinion from an animal lover. I am 16, and I have an adorable teacup Maltese named "Snowflake"; she has been with me since I was 10 and I love her very much! She only weighs 2 pounds, and fits into my purse she is so small. She is an indoor dog, and uses a litter-box like a cat. She has plenty of toys to play with, and gets enough exercise by running around the house and climbing up and down stairs. My mother, however, believes that dogs should be allowed to go outside to get sunshine and fresh air, and insists on taking her with her when she goes jogging. This is my problem:

Snowflake is obviously way too small to be able to keep up with my mother while she jogs, so my Mom - thinking this is a way to add resistance to her workout - insists on putting Snowflake into a huge baby stroller and pushing it as she jogs through the neighborhood. Not only is this completely humiliating (have you ever seen something like this?) but I am afraid that this practice puts Snowflake at risk of being snatched up by an animal predator. Birds of prey such as owls, falcons, and hawks have been spotted in my area; and leaving Snowflake exposed - like she is when she is in the baby stroller - makes her an easy target.

My Mom thinks I am over-reacting, and using the idea of Snowflake as a bird's lunch as an excuse to get her to stop this humiliating practice. The fact that tossing the baby stroller from her jog would be an added bonus to keeping Snowflake safe has crossed my mind; but it is not the reason I object to my Mom taking Snowflake on her jogs. I am honestly concerned about my dog's welfare! Could you please help me explain to my Mom the danger Snowflake is in every time she is taken out like this?

I have in fact seen people who take their small dogs out for a stroll in a baby carriage/stroller; and I have often wondered exactly why they were doing that. Thank you for offering clarity on this practice. Can you also explain why someone might do this to a cat? 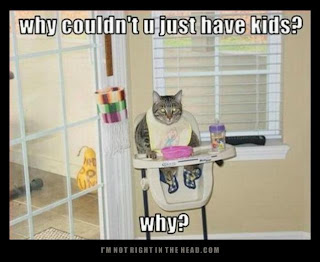 As for what you were saying about birds of prey, you are correct that they would find your dog a tasty meal, and in worrying about the fact that your dog would be exposed to them while being pushed in a baby stroller. Unless the stroller has a roof/cover on it, birds of prey will have that proverbial bird's-eye-view of your dog and would be able to swoop down on your pet before your mother would have the chance to react. Furthermore, these birds have an incredibly large wingspan (4 - 6 feet from wingtip to wingtip) and very sharp talons. If a bird were to swoop down to attack Snowflake while your mother was still moving, she could end up the unintended target of the attack. This is something that needs to be pointed out to her immediately.

While I agree that all animals need fresh air and sunshine, both can be found by a screened window on a sunny day. The veterinarians I have met at the animal hospital all say that being an indoor cat keeps me healthier and will let me live a longer life. The same can be said for your dog. If you must take Snowflake outside, you must also make sure that she is well protected - and a baby stroller is not a good form of protection. If your mother wishes to jog with a baby stroller for extra resistance, she can do just that; substituting a two-pound barbell in place of Snowflake.